What have the POAs done for you?

Sound bites can be powerful – and misleading. Our community is being bombarded with misinformation on social media and letters to the editor negating the value of our POAs and how they work for our residents in collaboration with Village services, the Mayor and Board of Trustees.
Here are just a few examples of how the POAs responded and supported residents after a concern was raised:
• Traffic safety issues were raised at a CPOA meeting which resulted in the initiation of a traffic study for the Central section. This report will be presented shortly and the GC POAs plan to utilize this study as a pilot to then expand throughout all sections of the village for the improved safety of all residents
• EPOA was made aware by a resident that National Grid planned to run a new, 24-inch gas line through the Mott section. The EPOA Directors worked with the Trustees and National Grid for over 1 1/2 years to successfully have the gas line rerouted off residential streets (Wetherill, Transverse and Lefferts Rd., Fair Court, Washington Ave and Arthur St.) and moved to County Seat Drive.
• In 2021, residents wanted more access to the BOE and to know their concerns were heard and addressed. They attended CPOA meetings, agreed on a plan with the CPOA BOE Trustee and their concerns were presented to the BOE.
• WPOA has been raising awareness of traffic/safety issues arising in the 4 areas off the New Hyde Park corridor and are working with Nassau County and Village Traffic Commission to address problems and seek solutions concerning (1) the entrance to GC at NHP Rd underpass, (2) the dangerous Stewart Ave traffic signal, (3) the intersection of Salisbury Rd, and (4) the need for an improved and safer street crossing @ Dartmouth & NHP Rd to better access the business district on the west side of NHP Rd.
• In 2019 residents expressed concerns over a possible plan for St. Paul’s. The CPOA developed and distributed a SurveyMonkey that solicited resident input on general use as well as specific features that were proposed, such as a hockey rink. The survey was made available to all residents both digitally and in hard copy (distributed at Senior Center and Village Hall) with the results submitted to the BOT.
• In 2018, the EPOA worked tirelessly with the BOT and BOE to mitigate the impact of 555 Franklin Ave. on residents. The EPOA continually relayed resident concerns regarding schools, future commercial planning, increased traffic and impacts to Raymond Ct residents resulting in an agreement between the Board of Education and the developer who agreed to pay the school district $500,000 over five years.
The Garden City News Friday, March 11, 2022

• Street flooding concerns were brought to the attention of the EPOA which were negatively affecting residents on Chestnut, Prospect, St. James and Washington Ave. The EPOA worked with the Village over several years to get these safety issues addressed. Construction of new storm-catch basins to mitigate flooding was completed in 2021.
• CPOA initiated the Student Ambassador program, creating opportunities for high school students to learn more about Village governance which has expanded into ALL other POAs.
• ALL the POAs provide a college scholarship in addition to having created a 2-way interactive program for high school students.
• Prevention of Nassau County’s proposed reconfiguration of the Stewart Ave./Clinton Rd. intersection was achieved through collaboration of the EPOA, CPOA, BOT and then Mayor Episcopia to rally residents and win the support of Legislator Laura Schafer to oppose and prevent the detrimental reconfiguration plan.
• The WPOA worked to support resident’s concerns with a traffic/safety issue at Vassar & Edgemere Roads which was complicated and required collaboration with WPOA Director of Police, Fire and Safety, Western BOT and Directors along with hours of resident input, resulting in a 3-way STOP placed at Fairmont & Edgemere Roads.
• Some residents on Meadow Street only had access to street parking which was being overtaken by employees of local businesses. They went to the EPOA who worked with the Village and the residents to have parking rules modified.
• In 2018, Hilton Hall residents expressed loss of parking near their building in lot 7N due to commuters utilizing the lot, then walking to the LIRR. The CPOA worked with the BOT, escalated to the Traffic Commission and action was taken. The creation of permitted parking spaces now allows residents this option close to their building.
• The EPOA worked with the Village, MTA/LIRR and local politicians to assist residents in resolving concerns regarding late trains and idling commercial trains, resulting in MTA/ LIRR issuing a memorandum of understanding to limit late night track usage and idling of commercial trains. Additionally, the LIRR now provides advance notice of late-night train activity so that area residents can be notified.
• EstatesPOA and WPOA addressed resident concerns of increased plane traffic over the Village and worked with the FAA to successfully reduce the air traffic coming from both JFK and LaGuardia Airports.
• WPOA formed a Firehouse Committee that worked for months to evaluate the firehouse and held several discussions with the BOT, presented to WPOA and a special BOT meeting and issued press releases which were instrumental in stopping the demolition of beloved Edgemere Firehouse and the resulting ongoing review of GC Fire Department operations.
• Nassau OTB Casino proposal at the old Fortunoff site was addressed by the EPOA who worked with nearby communities to successfully stop development which would have negatively impacted the entire village.
• Child safety concerns were brought to the attention of the WPOA for Our Precious Angels Day Care and Preschool. WPOA took owner’s concerns to the Village resulting in proper signage being installed alerting motorists and others to be aware of small children.
• The GC POAs worked with the Village to have permit requirements for residential sidewalk replacement abolished.
The Garden City Property Owner’s Associations were established as non-profit community groups to support our Village and resident’s concerns.
They are not a fad and will continue to be a voice for the community
and a conduit for improvement and change in our Village.
00
Garden City Western POA
Garden City Estates POA
Garden City Central POA
Garden City Eastern POA
Friday, March 11, 2022 The Garden City News 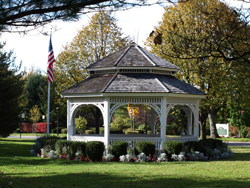